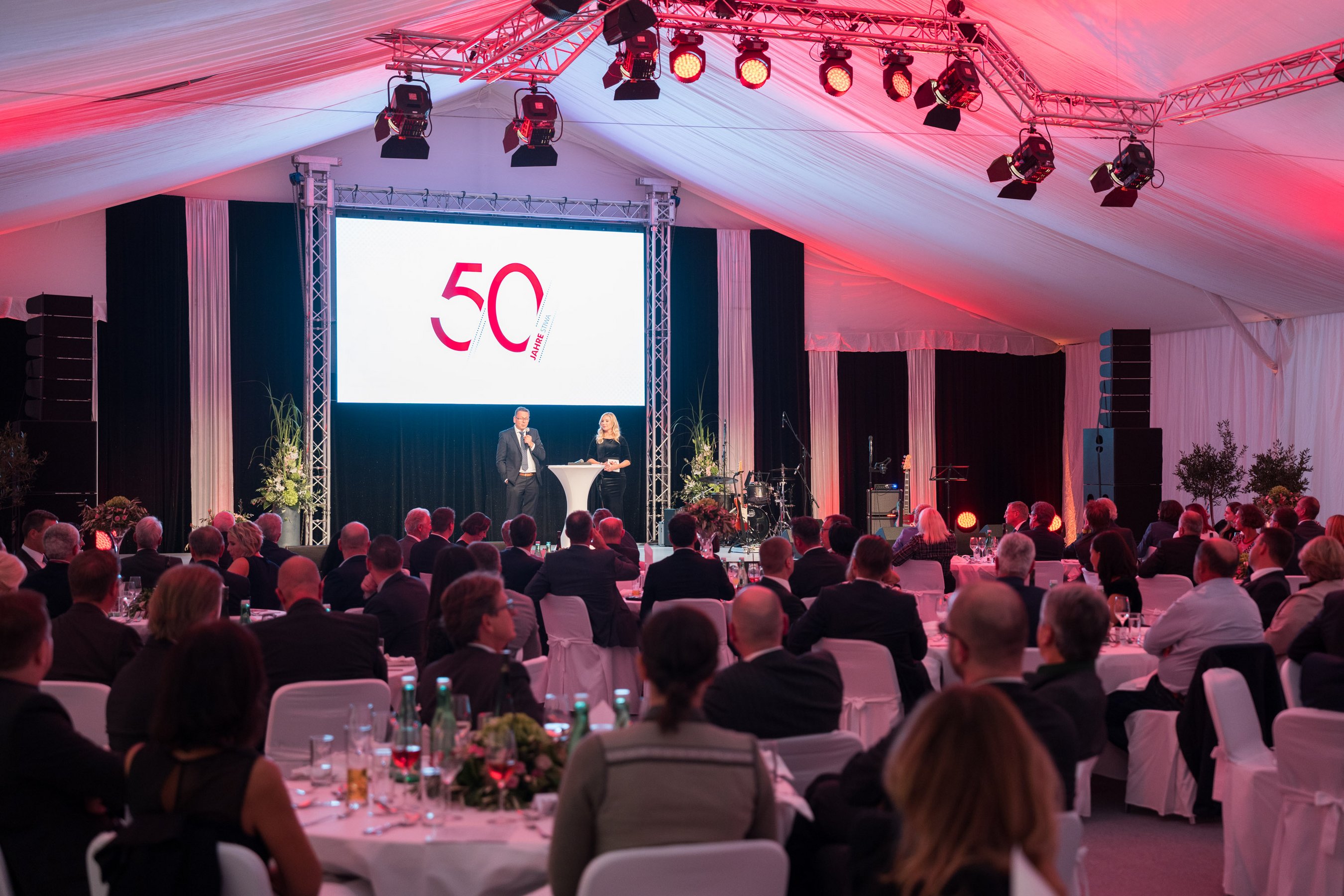 A festive gala evening with more than 200 invited guests, including a large number of long-standing customers and established partners as well as representatives from politics and business, as the celebratory highlight of STIWA's 50th anniversary.

A festive gala evening with more than 200 invited guests, including a large number of long-standing customers and established partners as well as representatives from politics and business, as the celebratory highlight of STIWA's 50th anniversary

From a one-man company with a start-up capital of 100,000 Austrian shillings to an international company specialising in automation, with more than 2,300 employees on three continents worldwide: over the past 50 years, the STIWA Group has written an impressive success story. Consequently, a large number of people visited STIWA's headquarters in Attnang-Puchheim to offer their congratulations. More than 200 guests – including many regular customers and long-standing partners such as representatives of the companies blum, Greiner or thyssenkrupp Presta – attended last week’s gala evening at the invitation of the Sticht family marking the highlight of the event that was held at the company premises.

In his keynote, company founder Walter Sticht looked back at the early beginnings of the STIWA Group and highlighted the great importance of its long-term customers and partners in driving the development of the organisation. Peter Sticht emphasised that despite major challenges – keywords: energy crisis, Ukraine conflict, supply chains, energy and material prices and an uncertain outlook – the company remains optimistic for the remaining year. Thanks to the successful integration of the company's three major business areas, automation, manufacturing and software, the STIWA Group’s position remains strong. Mr. Sticht expressed his gratitude to the entire team and to all employees who play a key role in the company's success.

Acknowledgement from politics and business

The guest list also included Governor Thomas Stelzer, WKO-OÖ President Doris Hummer and IV President Stefan Pierer. In his speech, the governor emphasised STIWA's innovative strength, and once again underlined the significant importance of large industrial organisations such as STIWA for the successful growth of Upper Austria as a business location. Doris Hummer was impressed by the successful apprenticeship training at STIWA – until today, more than 1,000 young people have been trained as skilled workers in over 40 years.

The celebrations were topped off with a large in-house exhibition at the Attnang-Puchheim location, where STIWA presented the company's entire service portfolio from its automation, manufacturing and software business areas to its many partners, customers and suppliers in the form of lectures and displays. The big employee party which was attended by more than 1,000 employees had already taken place in the summer.

In its anniversary year 2022, the STIWA Group continues to put a lot of effort into driving its further development: STIWA’s software division was merged into an independent company, and a new location was inaugurated in Vienna this year. Moreover, a new production hall for efficient machining is currently being built at the Gampern location. The Group also strives to further expand its international capacities: STIWA is currently looking for a suitable location to build an office and production facility in the USA next year, where the company aims to set up its own chipping division complementing its automation operations.